It’s not easy to pull off a really good, binge-worthy Korean drama and at the same time illuminate and educate about an issue that perhaps we as a society need to re-examine, but the recent K-drama Sky Castle is doing just that. And yes, while the styling of the three main female leads is a draw, it’s the message behind the drama that is captivating viewers. Here, an insider look into the sometimes impossible educational standards that Korean parents set for their children.

If you’ve read my previous articles about K-dramas, y’all know that I’m not a Korean drama aficionado. I don’t follow any K-drama Twitters, I’m not checking YouTube for upcoming teasers, and somehow even I am intensely aware of the recent Korean drama hit Sky Castle.

The basic premise of Sky Castle is that there are four über rich families all vying to get their children into Korea’s top colleges, with the respective matriarchs being the focal point of their families. It’s literally exploded in Korea, taking the spot for the highest rated series in the history of Korean cable television (the most recent episode had over 23% viewership nationwide — almost unheard of for a cable drama). It’s so popular it got extended from 16 to 20 episodes, and it’s outpacing Goblin in its performance in ratings. 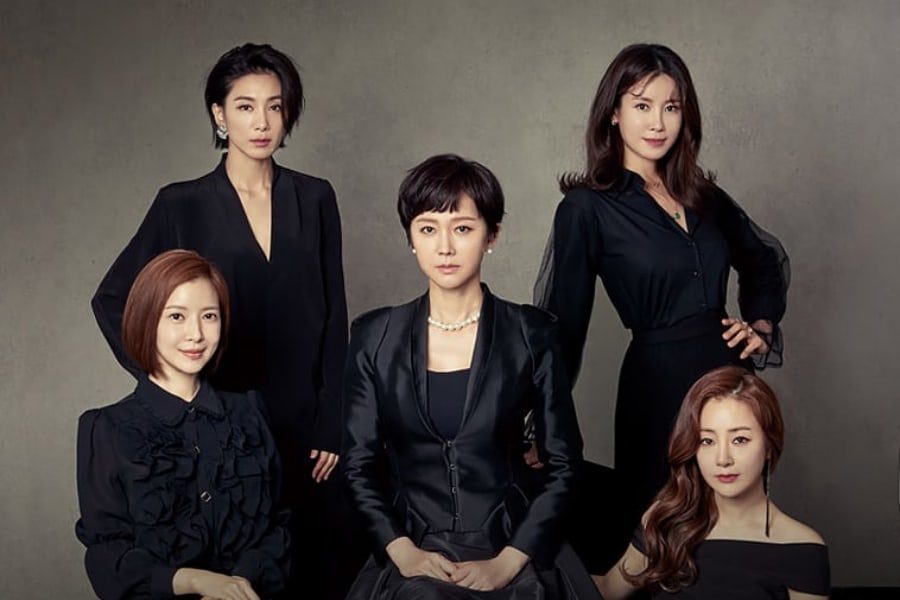 I’m a little less than halfway through myself, so I won’t be spoiling any plot points here, but we’ve got to have a chat about how they’re styling the stars of this intense phenomenon and, and more importantly, why the drama itself is resonating so much with the public. It may seem like it’s just a drama about some rich families sending their kids to school, but it goes so much deeper than that.

Han Seo Jin is one of the central moms of the story. She has two daughters who she’s determined to make succeed — “make” being the key word. Her husband is wrapped up in his own medical career and they don’t appear to enjoy each other’s company very much, which leaves Seo Jin to run amok on her own. To say she’s not afraid to rock the boat is an understatement: She wants to sink the whole damn ship so she can try to drown everyone, build a new, bigger ship, and make you beg her to get on it.

Her whole being just screams money. Her outfits have a clean simplicity to them, but they span a wide range of colors, fabric textures, and silhouettes with a parade of blouses, dresses, blazers, skirts. She has a serious commitment to pearls but also is never overly flashy in her appearance. She has money, but she doesn’t need to scream about it (she screams about plenty else), and her seriously glowy skin topped off with an upgraded pixie cut takes her from “Can I speak to your manager” to “I’ve had your manager fired now get away from me.” 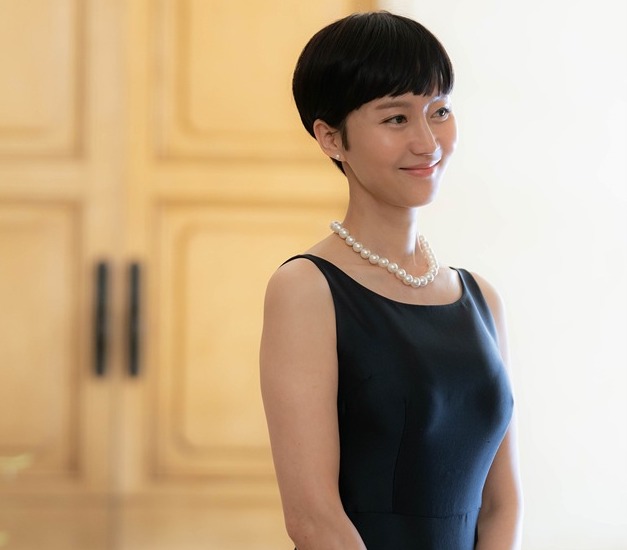 She definitely stands on the more minimal end of the makeup spectrum as well; when she’s not on a rampage, and honestly even when she is, I cannot stop looking at her skin. It’s the literal epitome of everything I’m patting and layering my way towards. Obviously there is makeup involved, but I’m not referring to the perfectly even tone of it, but more so the quality of how healthy and resilient it looks. Nothing about her complexion says irritated, flaky, or congested, and that truly is skincare goals.

Kim Joo Young holds the keys to the castle, so to speak. In this intense race of the four main families to get their children in the Ivy League of Korean higher education, she calls the shots and can dictate if the lifelong dreams of these children and their parents (mostly their parents, let’s be real) come to fruition or not. What this boils down to is that she is one of the only people that some of the characters not only respect but actually show any type of submissiveness or humility towards. She doesn’t come from money, isn’t impressed by any of their wealth, and this is not the first time she’s had people begging her to help their children succeed. Her calculated manner oozes out of everything from her voice to her outfits and her makeup.

Structured. Black. Outfits. I don’t recall her wearing much else, and with her hair slicked back into a ballerina bun basically at all times, you really can see how minimal yet severe her look is throughout the series. Her brows have a defined point throughout the top and the line underneath is razor sharp going up at a slight diagonal, adding to how, well, pissed she looks the entire time. I would be too if my job consisted of droves of rich families bringing in their “gifted” children for help.

It may not seem like it by Western standards, but she’s also pretty contoured all throughout her face (i.e. cheeks, nose, eyes) with a lot of cooler tones, and her base leans on the matte side of the spectrum. All of this gives off a controlled and calculated vibe to her entire demeanor. Even when she’s getting sucked into the drama and is wrestling with her emotions, she is not going to run around screaming and crying every episode like many of the more volatile characters.

Soo Im arrives as the new mom on the block, along with her husband who is newly promoted and her son who excels academically but doesn’t receive professional tutoring. Soo Im actually remains pretty hands off with her kid’s academic life and is more focus on raising a kind, respectful, confident human being.

You better believe that sets the other moms in Sky Castle all the way off. She flat-out states at one point in an exchange with Seo Jin that she sees no use in anyone’s child excelling academically if they cannot get along with other people well, and that attitude is not one that’s welcomed. At ALL. They cannot believe that someone as seemingly “common” as she has a child that is performing just as well as any of their children in school on his own accord, and even the other children end up showing hostility towards her. 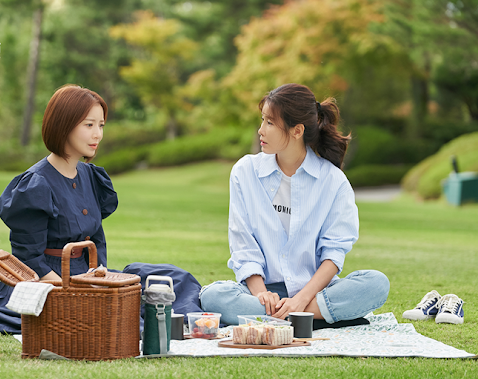 Early in the series, she was completely shocked upon learning how much money is spent tutoring these children, and her naiveté is interpreted as judgment and disrespect by the other mothers. It’s literal oil and water, and everything from her ponytails to her striped shirts set her completely apart. Her styling stays very casual in stark contrast with much of the rest of the cast, with simple shirts, jeans, and Vans or Chucks. The other moms would probably not be caught dead in such attire, and Soo Im honestly could not care less, which really just makes everyone even more mad at her.

So is Sky Castle real?

When I initially heard about the premise of the show, I didn’t really take much interest in it, but as I’ve made my way through the episodes, it’s becoming clear to me why the show, and particularly its subject matter, is gaining so much attention. I was born in Korea and was raised stateside by my Korean mother and grandmother, so I have my own limitations on the perspective I can offer, but this intense expectation for success is something all of my Korean friends and I frequently talked about growing up.

It’s quite common for parents to push their children academically, and in general, all parents want their children to be successful. However, I do feel like this “be a lawyer or a doctor” Asian parenting archetype gets relegated to a punchline all too often, and the reality of the situation for Korean children is both not discussed enough and misunderstood by foreigners. The best way I can describe it is that doing well in school and getting a “good” job is not only about pleasing your parents, it also encompasses you bringing prestige to your family and honoring the work that your ancestors have put into carrying on the family lineage, in addition to being someone who contributes to the current and future prosperity of the nation. So when you’re 15 and get a B on a report card, it feels like you’re not just disappoint your parents, you’re somehow simultaneously bringing shame to your entire family line and are being a hindrance to the future growth of your society. It’s too much for anybody, let alone a child.

I think the show also brings to light the difficulties that parents go through in raising their children. There’s no blueprint on how to successfully raise a child, and in the process of just trying to do their best, parents will inevitably make a ton of mistakes. Granted, Sky Castle does take things to the extreme through the lens of a black comedy, but what else would we expect from Korean television? It’s easy to be shocked and laugh at the absolutely insane things some of the characters do, but at the heart of all their actions is a parent doing what they think is going to help their children have a good life. In general, there is a lot of formality and tradition that can take place in a Korean household, particularly in regards to how parents and children interact, and trust me, open dialogue and compromise are definitely not among those traditions. Now I’ve only gotten a BA in psychology and a minor in family & human dynamics, but I can tell you, that generally doesn’t have the best outcome lol.

I can understand how pulling commentary on deep societal issues from an over-the-top drama can feel like reaching to some people, but that’s the whole point of the arts, isn’t it? It serves as a way to provide entertainment while highlighting a message, which is often not the most comfortable and easiest of subjects to discuss. With nearly a quarter of the population watching at this point, I hope that Sky Castle, in all its ridiculousness, can help some people to re-examine the relationships with their own parents and/or children, and really think about what success actually means at the end of the day.

Have you watched Sky Castle yet? Who’s your favorite character, and what aspects do you relate to, if any?