Culture Shock: 7 Things I Learned When I Moved From Korea to the U.S.

Lesson #1: Eat all the tteokbokki while you still can.

Not once in my life did I ever expect to experience a deep sense of culture shock in a Western country where the main language is English and I didn’t need to rely on Google translate to accomplish simple tasks. After all, I had lived in South Korea for three years and not only survived but thrived. So when I moved to the U.S., I wasn’t quite ready for the waves of confusion that I was to encounter.

Culture shock can take you by surprise, whether you think you’re prepared for it or not. Upon my first visit to the U.S.A., I stumbled a few times over this sense of misplacement and disorientation, unsure how to handle it.

The U.S.A. I knew was the one from the movies and shows I had grown up watching. You know, Gossip Girl, The Devil Wears Prada, Black Swan, those types of films. My best guy friend was a born and bred New Yorker, and despite a decades-long friendship filled with FaceTime chats and tales of his life in the big city, I was not ready.

Let me give you a little personal background. I was born and raised in South Africa, where I grew up speaking three languages. English is my home language and the language I was primarily educated in. I learned Afrikaans from the age of 8 and continued to learn it as a second language until I was 18. My university was dual-language, meaning that my lectures were taught half in English and half in Afrikaans. My third language was isiXhosa, an African language that is widely spoken in South Africa.

I spent three years working in South Korea, where I quickly learned to read Hangul, the alphabet, allowing me to read menus, signs, and just about anything I needed to. My reading speed is probably as slow as a first grader’s though, and I would sound out each character in an attempt to make sense of the word. On the speaking front, I knew the Korean words for most foods, directions, and simple greetings. I don’t think I’d be able to string a sentence together, unless it’s something as simple as “I’d like two rolls of tuna kimbap, thank you.”

After meeting my wife and deciding to move to the U.S., I thought it would be as straightforward as my skincare regimen and hopefully as smooth as my face after a sheet mask session. Oh, how wrong I was!

My first visit to the U.S.

I visited New York City for the first time in December 2017 and thought that because I could handle the rush and energy of Seoul that I’d be fine.

Everything was so overwhelming. The subway system had me going the wrong way most of the time, leaving me in a state of confusion and on the verge of tears. I could manage Seoul’s subway system with ease, but this was a whole new ballgame. I’ll never forget trying to get to JFK airport with a 50-lb. suitcase in the snow. I attempted the subway, but after going the wrong way and risking missing my flight, I emerged from the underground and grabbed the first taxi in sight.

Something as simple as ordering a coffee in the U.S. was also a challenge.

“Could I have one coffee please”? I asked the barista, who had a strong Jersey drawl. “How’d ya want it, sweetie?” she asked. “Tall, grande, creamer, sweetener, half and half?” This is where I panicked. All of the options overwhelmed me. I mumbled and fumbled and immediately forgot how to speak English, while the line behind me grew rapidly. “Let me give you some advice,” she said. “If you don’t know what you want then I can’t help you.” I regained my senses and settled on the Americano, cheeks red with embarrassment.

Despite being a native English language speaker, I had never felt more out of place in the U.S. I have travelled widely, lived in the UK for a few months, and collected my fair share of passport stamps. Even after adjusting to Korean culture, this American culture was a whole new world to me.

My culture shock is obviously a very personal tale, and I’m sure others have experienced similar feelings when visiting any other place. My comparison comes primarily from my time in Korea, since it is perhaps best compares to a Western country such as the U.S.A.

A few elements of my culture shock, in no particular order.

I don’t even know where to start with this one, but I think Oreos are as good a place as any. Back in Korea, I was happy enough just to find a box of regular Oreos. Now I was faced with options. Options that simultaneously excited and overwhelmed me. Should I try Birthday Cake Oreos? How about Brownie Batter or Red Velvet? Surely nothing could taste as good as Strawberry Milkshake Oreos, but I think I’d have to draw the line at the Fruit Punch option.

The U.S. is known as the land of variety, and when it comes to food choices, nothing could be more true. Before I visited a Chipotle for the first time, I asked my then-girlfriend-now-wife for her list of recommendations. This really helped with my initial panic at all the new food options available.

American people can be very (very) friendly, and it’s not uncommon for strangers to initiate small talk in public areas. I remember shopping in department stores in New York City and being quite shocked when a stranger would ask my opinion on a pair of sunglasses. In Korea, people definitely tended to keep more to themselves. Perhaps it was also due to my super basic level of Korean.

One thing that shocked me about South Korea was how quickly one’s personal bubble gets squished and squashed. I found the U.S. to be the exact opposite, with people making allowances for other people to have that much-needed personal space.

Remember that South Korea is just 600 miles long and only 20% the size of California, meaning there isn’t much room to play around in. With nearly 2/3 of the land comprised of mountains, things are a little more cramped. When queueing in line in Korea, there was little guarantee that whoever was behind you wasn’t going to be breathing down your neck. Public transportation was no different, and it was often inevitable that a stranger would touch some part of your body. I’ll never forget a trip to my local jjimjilbang and mokyotang, where a Korean ajumma came right up to me and spanked my naked butt, remarking how strong it was. 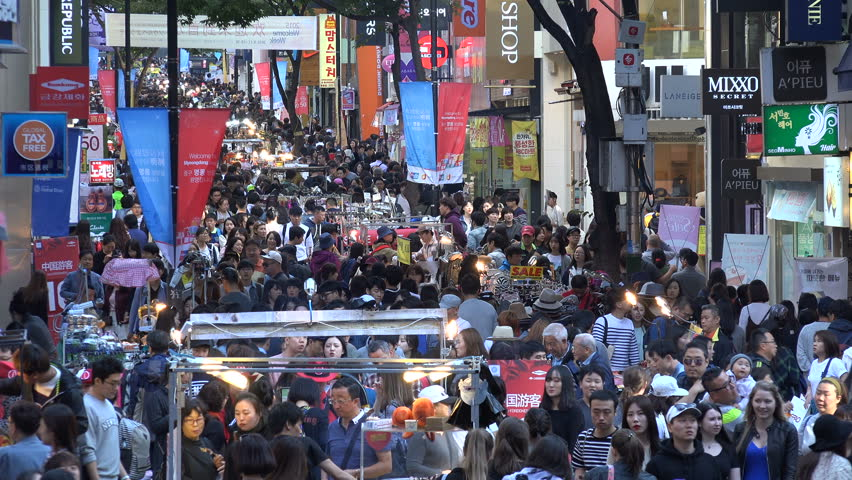 Now in the U.S., my bubble seems to have widened back to a more comfortable size.

In different cultures, eye contact can mean very different things. In some East Asian countries, it is deemed impolite to make direct eye contact with strangers. In some Western cultures, the opposite is true.

When I first moved to Korea, I was confused as to why many people wouldn’t look me in the eye. I soon learned that direct or extended eye contact can be understood as an affront or a challenge to authority. It could also be considered rude. I became accustomed to this, and on long train rides would happily keep my eyes to myself while I was listening to music or reading.

In the U.S., I was thrown back into the world of making eye contact, where it generally indicates interest, confidence, and trust. This took a little getting used to.

This is one element I was not too fond of when first visiting the U.S. In Korea, tipping is not a thing. In South Africa, where I’m from, the tax is included in the bill, and people generally tip between 10-20%. In the U.S., the minimum for tipping is 20%, and more is expected for great service. No one wants to be seen as a scrooge, so I learned to hop on board the tipping bus very quickly.

I’m referring to the lack of spicy food, and in particular, spicy Korean street food. Sorrow filled my heart when I realized I couldn’t find spicy tteokbokki on every corner, or buldak (literally, fire chicken) on each bend. While kimchi is not inherently spicy, the full flavors and all-round umami feel from a steaming bowl of kimchi jiggae (stew) were sorely missed.

I tried to fill this gaping hole by trying all the New York street foods I could — hot dogs, pretzels, and bagels, but there was simply no comparison. My fridge is now always fully stocked with a 4-lb. jar of kimchi and cartons of doenjang (soy bean paste) and gochujang (red pepper paste), should the heat craving arise.

This may seem like a strange thing to feel shock toward, but after three years in Korea I learned to kinda switch my brain off when in crowded or noisy spaces. If I was shopping in Gangnam or picnicking along the Han River, I would often drown out the background noise, simply because it was too overwhelming for my brain. I became comfortable in this weird bubble, where I only took in the necessary information.

In the U.S., I could now understand every single word that crossed my path, and it was stressful. A train ride to Brooklyn meant hearing about a stranger’s break-up and a little kid’s excitement about going to the park. It was almost as if my hearing was turned back on, and it definitely took a while to feel comfortable.

After nearly a year in the U.S., I can officially state that my culture shock is gone. I’ve moved through the stages of this process, from the honeymoon stage to irritability to gradual adjustment and then an adaptation of biculturalism. It hasn’t been easy, and I’ve learned to take it one step at a time. Although I grew up in what is considered a Western nation, the new culture I was faced with in the U.S. was nothing like my home country. Stresses and stressors aside, this experience has taught me to be tolerant and patient with myself and the new places I find myself in.

I’m pleased to say that I’m now thrilled with all of the variety at my fingertips and delight in the fact that on any given day, I have access to about 25 different types of Oreos.

Have you ever experienced culture shock in the U.S. or any other country? Let's talk about it!