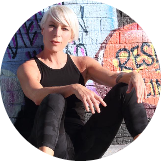 Leading health and wellness experts weigh in on how to remain calm, nourished, and healthy on Election Day (and beyond).

Our nerves are shot. We’re irritable, we can’t concentrate or sleep. And, even though we know it isn’t good for us, we continue scrolling through the news cycle, anxiously anticipating the outcome of the most contentious election in history.

So, what can we do to take care of ourselves? Not just for today but for all of the days that are coming, because no matter who ends up in the White House, life as we know it will continue to challenge us. I spoke to therapists, nutritionists, personal trainers, poets, and breathwork practitioners to find out how we can best cope with stress and anxiety.

I know it sounds kind of obvious, but we’re not talking about the regular kind of breathing that keeps us alive, but a breathwork practice. Psychologist Dr. Fay Van Der Kar-Levinson has been helping families deal with life-changing moments like new siblings and marriages, divorce, and death for more than 30 years. She suggests going with 7-11, and not the convenience store. “Inhale through your nose to the count of seven before exhaling again through your nose to the count of 11,” she says. “Practice by doing three rounds of this calming breath three times a day - ideally do the first round as you wake up, before your feet even touch the floor.”

Licensed psychotherapist and founder of Therapy For Adults, SteVen Reigns agrees on prioritizing breath. “It’s one of the easiest and fastest ways to recalibrate and gain perspective,” says Reigns. He recommends Square Breathing or Box Breathing to reduce immediate anxiety. “In a seated position with both feet flat on the floor, exhale until your lungs are empty, count to four, then gently inhale through your nose for a count of four, hold and count to four again before exhaling through your mouth for a count of four.” Repeat this four times.

Personally, when I think of breathwork, I think of practitioners like Michelle D’Avella of Pushing Beauty, and that’s because I have used this practice as a coping mechanism. “Breathwork is a powerful tool that supports us in releasing emotions so they don’t drain our life force,” Michelle explains. “As we process our emotions we learn more about ourselves, life itself, and access a clearer vision for what we want to create and how we want to show up in the world.”

An active meditation that utilizes short bursts of open-mouthed breathing, loosely based on the rebirthing practices of the 70’s, breathwork is excellent for people like me who have a hard time staying focused with regular meditation. Practitioners breathe in three stages–inhaling first to open the chest and then deeper to expand the belly before exhaling and beginning again–all through an open mouth. If you’d like to try it, you can follow Michelle in this short video.

“The food you eat and the sleep you get is what fuels you throughout the day,” says therapist Reigns. “Be cautious with your intake. Caffeine and sugar might initially create a spike in mood but will ultimately lead to a harsh crash.” And a restful sleep can help with temperament and perspective.

Nutritionist and life coach Melinda Mrachek Staehling, founder of Chek Please agrees on the necessity of balancing your blood sugar levels and getting enough sleep. According to Melinda, extreme fluctuations in blood sugar levels leave us feeling cranky and lead to stress headaches, something we definitely want to avoid today. She suggests eating every three to four hours and prioritizing protein, fiber and fats. “Solid sleep is really my biggest strategy to remain calm,” she adds. “Disrupted sleep has the ability to impact our concentration, stress level, hunger and fullness cues.” So don’t bring the phone or the news into the bedroom!

As far as what to eat on Election Day, Staehling recommends colorful foods, like a rainbow of fruits and vegetables, and being creative. “Taking a little timeout to prepare something with some thought and attention, away from the news, made me feel really good,” she says, while the fires were raging in her home state of Oregon. “I'm going with that strategy again this week.”

And if you’re looking for an added boost, try some supplements. According to Staehling, supplements do their best work as a support system, so focusing on a single day isn’t the best strategy. But for the long term, she suggests looking into magnesium, lemon balm, kava and B vitamins. And, get outside! The best source of vitamin D is the sun!

My first love is exercise. I have a degree in kinesiology and I’ve been a personal trainer off and on for years. Regardless of what I’m doing for a paycheck, though, I start or end every day with some form of movement. As someone who struggles with anxiety and depression in the best of times, I know that exercise makes me feel good.

Celebrity trainer Sarah Perla Hagaman uses exercise as a way to encourage connection and quell anxiety. She’s been sweating it out in her living room since March, posting high-intensity workouts to her Instagram account that incorporate Tabata, plyometrics, yoga, dining room chairs, and backpacks loaded with books. Exercise as a coping mechanism may require a shift in perception, though. “Unlike other calming tools,” she says, “exercise is too often associated with shame or punishment.”

Her suggestion: put on your workout clothes as soon as you wake up on Election Day and get moving before the kids or your boss need you. Go for an early walk or a jog, or plug into a home fitness app. You could even work out with Sarah in her living room. Just do something, she says, even if you aren’t feeling it. “Some days we feel it and some days we don’t,” she says, but “whether it’s 2O minutes or 60, I always feel better for having done it.” And this day is definitely one of those where you should get out there even if you’d rather pull the covers over your head.

Here is where I tell you again to GET OUTSIDE! Nature itself invokes feelings of well-being.

This doesn’t mean getting sloshed, as tempting as that might be.

“Though a drink or smoke might seem like a great way to “take the edge off” it might actually have the opposite effect,” says Reigns. “Substances can impede our ability to regulate our emotions,” making things even worse. “Think of the times you’ve seen someone drunk and crying,” he adds. “The alcohol prevented them from being able to self soothe.” Which can have dramatic effects in terms of the election results, so keep the chianti on the shelf if you can.

Instead, pamper yourself! “Indulge in a luxurious bath,” says Dr. Fay. “Treat yourself to a new body lotion, lipstick or foot scrub. Surround yourself with wonderful scents.” She doesn’t need to tell poet, professor and spoken word performer bridgette bianca twice.

“I plan to go the pamper and distract route with my self-care on Election Day,” she says. “That means Bolden Skincare’s GLOW Hydrating Face Mask,” and “streaming 90’s Black sitcoms while taking a long soak (or two!) in the tub.” She’s also going to be, “dancing around to plenty of Beyoncé and Tobe Nwigwe, and curling up with a romance novel.” Because no matter who ends up in office, she knows, “the revolution will be in full swing the next day,” and she needs to be ready.

If the pandemic has taught us anything, it’s that human beings are social creatures. We need each other, but we should be selective in who we’re reaching out to. According to Dr. Fay, anxiety can be contagious. She says, “this would be a good time to text and talk with people who avoid hysteria and tend to be calm and positive.” And try to laugh if you can, because, “it will help restore a bit of perspective.”

Writer and sixth-grade teacher Jessica Shoemaker agrees. She plans on spending the evening with a friend watching old Adam Sandler movies, and poet t.k. lê has organized an old school game night via Zoom. I think the point is to prioritize simple entertainment that is easily digestible and doesn’t require too much thought.

Let’s all make this a mantra:

And let’s practice this to get us through Election Day, and beyond.